It wasn’t love at first sight, in fact I hated them! The first set of wearables I laid my eyes on was ~30 years back and I remember gazing into a calculator watch as a 7 year old and thinking to myself that this “transformer like contraption” would never find its way on my wrist! It wasn’t until the hitech eye lens sequence from the MI series and more recently the deluge of IoT wearable devices that the spark has been ignited. From Smart watches, connected pets, activity monitors, wellness devices – the list of smart wearables goes on and on and on.  Some (my wife including) would argue that it is getting a bit much, as I currently own 9 connected wearables and am running out of real estate on my arms to wear anything more! But no one comes remotely close to Chris Dancy, the “most connected human on earth”, who utilizes up to 700 sensors, devices, applications, and services to track, analyze, and optimize many areas of his existence. Apparently he lost over 100lbs within a year, by not just tracking his physical activity but also by using sensors to correlate his calorie intake with the people he was with and the lighting in restaurants around him. By changing these 2 triggers he lost a bucket load of weight!!!

Analysts are predicting that people like him will help the wearables industry be worth over $30BN by 2020, fueled by the ever growing appetite for these devices. To my simple mind human bodies have been emitting data point for thousands of years, we finally have proliferation of consumers gadgets which allow us  to listen, quantify and take corrective action if need be. Having said that, I still believe we are yet to create the iconic product or experience that would make wearables cross the chasm between “early adopters” and “mass market adoption” globally, although some would argue that the chasm has already been crossed in US/Canada and some parts of Europe! 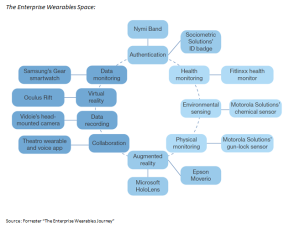 If I was an innovator in this super-exciting space today, I would ensure that the focus was on the consumer experience, aesthetics and social acceptance rather than making an engineer’s dream a tangible reality. Google’s recent realignment of the “potentially disruptive” glass program is proof. It is proof that despite having a breakthrough product from the “House of Google” – consumers can be brutal & unforgiving. It might have been better for these products to prove themselves in the enterprise or healthcare space first, which is much further ahead in the technology  adoption life cycle – nudging slowly on the hearts and minds of the end consumer through these socially intrusive wearable concepts. Take the example of using a google headset to convert visuals into audio commentary for the visually impaired- answer to many a million prayers, a truly life changing use case for a device being shunned by the consumer segment today!

All skepticism aside, I love my smartwatch, or the current version of it which is the Fitbit Surge. Having had the Pebble, Moto 360 and almost getting myself the Apple watch- I find myself extremely contended with a sub $300 watch- with 7 day battery life, a great physical activity monitor and a social angle which Apple clearly missed in its first attempt. Sometimes, “less is more” and clearly Fitbit has nailed it! My primary reason for getting the smartwatch was to ensure I did not miss urgent phone calls and text messages, which sadly was the norm due to my work days being packed with back to back meetings.  Secondly, I wanted to have a multi-tenant/purpose device as opposed to have 3 specialty products on me at any point of time. Essentially, what I am finding is that due to the utility of these smartwatches companies such as ”Swatch or Fossil” which truly play in the $200-500 price range are in the line of fire and until and unless they come out with iconic smartwatches their brand value and market demand might plummet rather soon.

For the first time I am witnessing technology being used so effectively to make our life’s simpler: from wearables for babies which let parents know that the diaper is soiled to assisted living products which help the ageing (and prosperous) baby boomers to live independently yet safely…truly “the art of the possible”. 2015 is also being touted as “year zero” for the smart clothing market (Sensoria, OMSignal), with garments moving beyond experimentation and becoming widely available to customers, albeit at a relatively high price point. The line between sublime & ridiculous is also being pushed by certain products-  recently came across a wristband which would “mildly  zap” the individual when a bad habit was indulged in….such as smoking or extensive usage of social media sites or even shopping, for that matter. Evidently it helps train your reptile brain to drop a habit with 5 days of continued “training”, so to speak. These corner cases aside, the take rate of wearables will really depend on the QoE and the value they bring to the users day to day life at an affordable price point. In one case, I had to charge my watch every 6 hours and I soon found that I was happier leaving it at home rather than wearing it all day long, in another it was difficult for me to internally rationalize spending $1000+ on another fancy connected gadget.

In summary, largely thanks to open IoT Platforms and commoditized M2M Sensors the velocity of consumer awareness and demand for wearable technology market is growing way quicker than most people anticipated, including your s truly. The market is dominated by a few key players in the wearable fitness (Apple, Fitbit) and identity space but is surprisingly open to new entrants if they demonstrate functionality & value at an affordable price.  It’s a great time to be around to witness innovation and rapid product development, and whichever connected wearable you chose make sure  you enjoy the evolutionary nature of these devices!!!